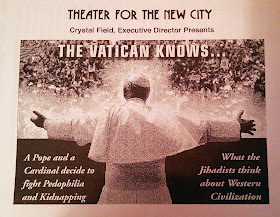 I went to the Theater for the New City in the East Village to see Mario Fratti's The Vatican Knows. The play is loosely based on the 2012 New York Times (May 14, 2012) article about the kidnapping of 15-year-old Emanuela Orlandi.

According to Times article, there are three theories about what happened to Emanuela:

1. One theory has it that she was kidnapped on the orders of an American archbishop, Paul C. Marcinkus [d. 2006], a former president of the Vatican bank who was linked to a major Italian banking scandal in the 1980s.

2. Others cite an anonymous phone call the Vatican received weeks after Emanuela’s disappearance, demanding the release of Mehmet Ali Agca, the [alleged Islamic extremist] gunman who shot Pope John Paul II in St. Peter’s Square in 1981, in exchange for her release.

3. Lastly, in 2005, an anonymous phone call to a television program implied that Emanuela had been kidnapped as a favor to Cardinal Ugo Poletti [d. 1997], who in 1983 was the vicar general of Rome. The caller also mentioned that Emanuela's kidnapping could have been related to the Italian mafia. (The BBC (14 May 2012) reported that the girlfriend of Enrico De Pedis, an Italian gangster, claimed that De Pedis kidnapped Emanuela in an effort to extort money from the Vatican.)

Approximately a week after the Times' article was published, another shocking theory was published in The Telegraph (22 May 2012). In The Telegraph, Father Gabriele Amorth, the Vatican's 85-year-old chief exorcist, confessed that 15-year-old Emanuela was kidnapped, forced to participated in Vatican sex parties and was then killed and discarded.

Father Amorth said, "This was a crime with a sexual motive. Parties were organised, with a Vatican gendarme acting as the 'recruiter' of the girls. The network involved diplomatic personnel from a foreign embassy to the Holy See. I believe Emanuela ended up a victim of this circle."

Surprisingly, Fratti's play only covered one of the theories, which was, unsurprisingly, the Muslim terrorist theory.